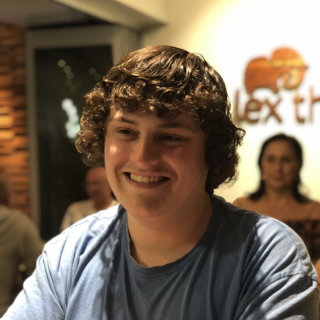 Hello, this is my Curriculum Vitæ

I'm a graduate of the Bachelor of Information Technology Co-operative Scholarship Program at the University of Technology, Sydney with a passion for IT and computer science. I also studied overseas in Dunedin, New Zealand at the University of Otago for my final semester. I am currently working at Kablamo with a big 3 telecommunications company.

I have previously interned at Appliances Online as a front end web developer. Prior to that, I have interned for and subsequently worked at Nine Digital as a full stack developer building the 9Now VOD website and APIs.

Further information is available upon request through the contact form.

I am currently working full time at Kablamo as a Full Stack Engineer. At the time of writing, I am working with a big 3 telecommunications company.

Prior to this I've worked with:

As part of my university degree, my third year placement was at Appliances Online. At Appliances Online I mainly worked on the website frontend which made use of AngularJS. Here, I was able to refine my frontend skills and at the same time learn new frameworks and tools.

Upon completion of my internship, I was offered to continue with Mi9 (now Nine Digital) on the 9Now project - Channel 9's AVOD catch up and streaming platform. I worked with a variety of services that power 9Now. I gathered API requirements for 9Now's API, working with internal teams. I developed portions of the APIs that power 9Now Website and Apps and worked on the 9Now website, developing features through the agile process.

As part of my university degree, I was required to complete two 6 month industry placements. Work at Mi9 consisted of both frontend and backend work for 9Jumpin and 9Now. Work on 9Jumpin consisted of business-as-usual tasks, as well as show experience builds for high-profile shows such as Channel 9's The Block. For a majority of my time working on 9Jumpin I was the sole developer with the site in maitenance mode while 9Now was built.

My role in the Macquarie Centre store consisted of store recovery and presentation duties. My work here concluded when I decided to focus on balancing my academic commitments with my full-time internship at Mi9.

My position involved a variety of tasks including nightfill, service duties, customer service, checkouts, customer championing, home entertainment and photolab work. In January of 2015 I relocated to Sydney for tertiary education, and applied for a transfer to the Macqaurie Centre store which was finalised in April 2015.

I participated in a work experience program with Big W whilst at school which entailed one day per week (9 to 5) for six weeks. At the conclusion of this program I was offered paid employment, which I accepted.

For my final semester, I studied abroad at the University of Otago. Here, I am studied Computer Science electives to further my technical understanding in the field.

I am a graduate of the Bachelor of Information Technology Co-operative Scholarship Program with the UTS, which involved two 6-month industry placements.

In July 2017, whilst in Dunedin, I participated in GovHackNZ, forming a team with 3 individuals whom I met at the event. Together, we produced a visual essay website, South Of 45 aggregating different open government data sources to derive meaningful insights for the local council. Our submission won two cash prizes totalling NZ$1500. To find out more, read the details on the GovHack page.

In July 2016, immediately after a work hackathon, I worked over the weekend with 3 University classmates to produce a location-based social network, Tagger which made use of the Government POI database for GovHack Sydney. To find out more, read the details on the GovHack page.

In January of 2014, I participated in the NCSS Summer School in the Python/web stream. We were tasked with building a social networking website and for this I worked as part of a team on Word By Word.

In January of 2015, I participated in the embedded systems stream of the NCSS Summer School. This involved working with electronic components in circuits and manipulating these with C/C++ code on Arduino robots.

I participated in the National Computer Science School Python Challenge during high school. In 2013 and 2014, I took part in the advanced stream which involved working with binary data, steganography, breadth-first and depth-first searches, grammar parsing and a variety of other concepts.

Sorry, you're using an unsupported browser

It looks like you're using an outdated browser that isn't supported by this website. Please upgrade now. Upgrading to a newer browser allows developers to create a richer user experience on the web and makes sure that you're always up to date with the latest features and security patches.

If you think there has been a mistake, visit the contact page in an alternate browser and include the debug information above.